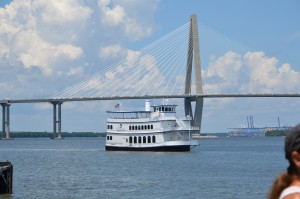 On a beautiful day in June, 30 Bishop Gadsden Myers Hall assisted living, Read Cloister skilled nursing and Arcadia memory care residents, staff and families boarded the Spirit Line Harbor Cruise for amazing experience traveling back in time. Our adventure set sail at the Charleston Aquarium, South Carolina’s only Sea Turtle Rescue Program. Spirits were high as residents were informed that because of the Sea Turtle Rescue Program, more than 125 sea turtles have been rescued, rehabilitated and released back to their natural habitat.

After the aquarium, with residents comfortably in their seats and in awe of Charleston’s natural beauty, we approached a landmark where the first shots of the Civil War were fired, Fort Sumter. This historical landmark named after General Thomas Sumter, a Revolutionary war hero, took residents back to April 11, 1861 and the 34 gruesome hours of fighting that took place. This was truly the climax of our “three hour tour.”

But the excitement didn’t end there! As we rounded the Charleston Harbor, residents were able to make sight of Sullivan’s Island and a landmark that is near and dear to them, Fort Moultrie. In 1776, construction on what is now known as Fort Moultrie began to guard and protect Charleston’s harbor from British warships. As construction on the fort drew to an end, nine British ships unleashed an attack on June 28, 1776. Under the command of William Moultrie and the soft palmetto wood, the fort stood strong. Due to William Moultrie’s bravery and accomplishment, they named the fort in his honor.

On our final stretch, residents got an up close and personal view of the 575 feet high and 1546 feet long, Arthur Ravenel Jr. Bridge. This bridge is symbolic in that it is the third longest cable-stayed bridge in the Western Hemisphere and it can be seen for miles in and around the Charleston community. Additionally, every year on the first weekend in April, 40,000+ runners and walkers take stride up and over the bridge for the annual Cooper River Bridge Run. The Ravenel Bridge is symbolic to the Charleston community and is something all Charlestonians should be proud to call home.

As we approached our destination and the end to a wonderful afternoon at sea, residents were reminded of Charleston’s rich and beautiful history. This history is what laid the foundation for what Bishop Gadsden residents now call home, Charleston.